Why I Switched From iContact To ActiveCampaign For Email Marketing

Are you looking for a new email marketing service provider for your photography business? Read this before you decide between iContact or ActiveCampaign. As you'll see, ActiveCampaign has iContact beaten in at least 6 major areas... (Disclosure: This article does contain affiliate links for Active Campaign. It does not affect the cost to you in any way if you choose to sign up, but I do receive a small commission for any referrals).

Email marketing is one of the most important components of any successful lead-generation marketing system, so having the right service provider to suit your business is critical.

Not just for me, but for you too, of course.

Over the years, I’ve tried many of the major systems and found that some are obviously better than others.

For example, here are the four largest ones I tried:

Of those, iContact was the one I settled on, and I used them for 8+ years up until the beginning of 2016 when I made the switch to ActiveCampaign. I even tried some of the others during my time as an iContact client, but I chose to remain with them rather than migrate everything to another provider.

What a mistake that was, and I seriously wish I had trusted my instincts and moved to ActiveCampaign two years ago when I first heard about them.

If you’ve been around me for any length of time, you’ll know that I’ve actively promoted iContact as the preferred vendor of email marketing for professional photographers.

To paraphrase Mr. Wonderful from Shark Tank, there’s a MUCH better mousetrap.

This Is NOT Just A Software Review

Just to make things clear, I’m not in the business of writing reviews for stuff just in the hopes of getting a kickback, or for any other reason than because I LOVE the product or service I’m talking about.

In fact, I rarely ever write reviews at all.

But I’m going to make an exception for two big reasons:

With those in mind I’ll simply and honestly compare these two services just on what they offer, so you can see for yourself what a no-brainer choice this actually is.

To keep this short and simple, I’ve compared these two email marketing platforms across 6 different areas: 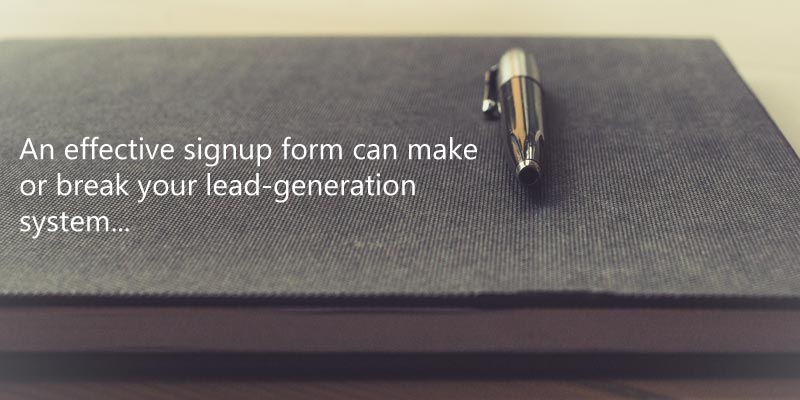 An effective signup form can make or break your lead-generation system, so it’s worth making the right choice at the beginning…

Both iContact and ActiveCampaign allow you to create signup forms you can deploy to your website and blog.

I tried so hard to like the forms produced by iContact for a long time but just couldn’t get past how ugly and boring they were. I eventually resorted to using 3rd-party plugins to create more attractive forms, which often involved some programming beyond the scope of most photographers.

In fact, many of the photographers who were using iContact ran into serious problems trying to implement these forms on their websites, with a large number being forced to give up in frustration.

ActiveCampaign, on the other hand, has a brand-new elegant form designer to create a wide variety of signup forms you can easily customize to fit into your own site.

From what I’m hearing so far, photographers are a LOT happier with this element alone. 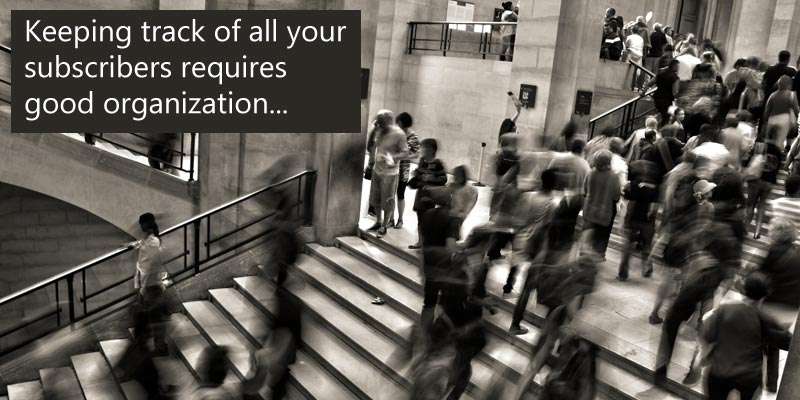 iContact and ActiveCampaign each manage email lists in different ways, and this was one of the main reasons for dumping iContact.

With iContact, contacts are subscribed to lists but the only way to properly segment your contacts is to create multiple lists. The problem is, if a person is subscribed to two of your lists, that counts as TWO contacts, not one. Given that you pay according to how many contacts you have, this can easily force you to upgrade to the next higher-priced level.

ActiveCampaign approaches this in a much fairer way. Each contact (essentially identified by their email address) counts as one, regardless of how many lists that contact is on.

Segmentation in ActiveCampaign is also simpler because all you need do is tag your contacts with keywords, which you can then use in a large number of creative ways. 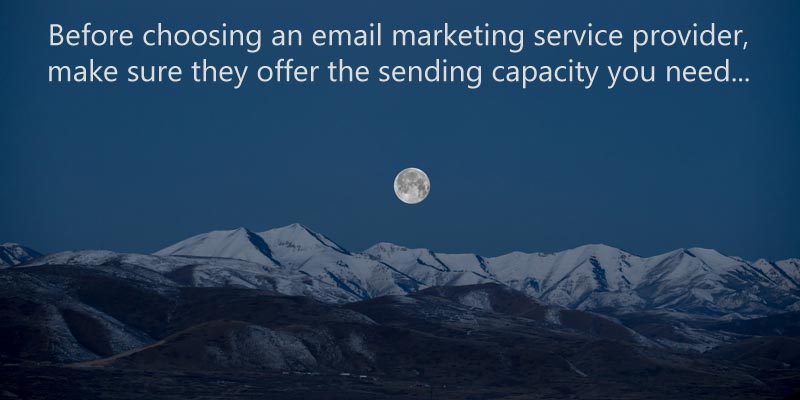 Before choosing an email marketing service provider, make sure they offer the sending capacity you need…

The number of emails you can send to your subscribers varies tremendously from one email marketing service provider to another.

For example, iContact had a limit of around 6 emails per contact per month, which is okay for most marketers. However, you can hit up against those limits if you’re running a campaign that requires multiple emails to be sent out.

Let’s say, you have a special promotion going on for family portrait sessions.

You would send out an email to your entire list (or a segment of it) as the initial offer.

Next, you might send a follow-up email a day or two later to the folks who opened the first email, and a different message to those who didn’t as a reminder.

A few days later, a final reminder meet need to go out.

If all this takes place over the course of a week or so, you only need a couple more emails to blow through your entire month’s sending limit.

And this doesn’t even include your regular weekly newsletter!

You can seen, then, why I was so pleased to discover that ActiveCampaign offers unlimited sending with all their plans, making it a breeze to produce such campaigns without running the risk of exceeding the sending limits.

Another win for ActiveCampaign. 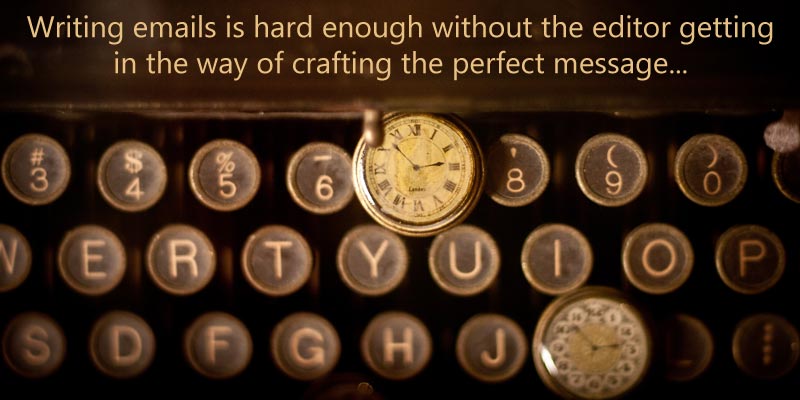 I’m sure iContact will upgrade their email editor at some point to improve it, but this was a constant source of frustration for me, which turned editing a simple email into a real pain in the butt at times.

The email editor from ActiveCampaign, while not flawless, is light-years ahead and much more robust with some cool features such as being able to define a default color for links. 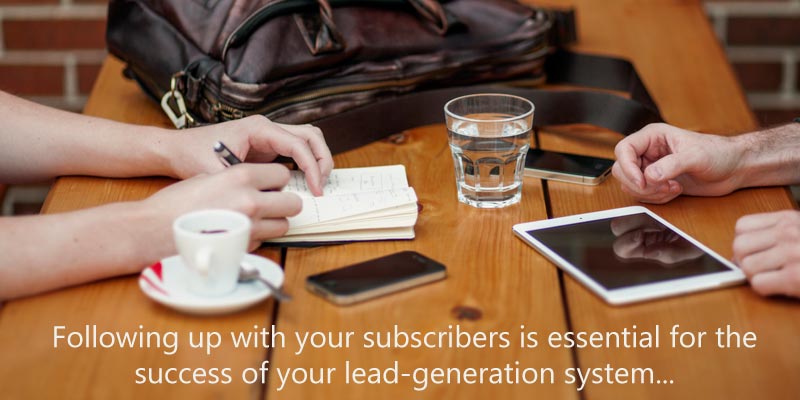 This is another area where ActiveCampaign have iContact beaten in a no-contest matchup.

You’re probably familiar with the terms “autoresponder” or “follow-up sequence”.

iContact allows you to create autoresponders (predetermined sequences of emails sent out over a period of time when someone subscribes to a list) but you can only have one autoresponder attached to any given list (another reason why multiple lists are needed), and it’s a huge hassle to change it once it’s started.

You also have NO idea of where any of your contacts are in the sequence at any time!

This was so hard to manage, especially for many of the photographers who tried to create effective campaigns on autopilot.

To say I was overjoyed with ActiveCampaign’s automation system is a gross understatement!

They somehow managed to create a system of almost infinite possibilities while still making it intuitive and simple to use with it’s drag-and-drop graphical interface. As a professional programmer, I take my hat off in the utmost respect to the folks who built the system, and it’s almost a work of art in its elegance.

For example, you can start an automation based on many factors, such as adding a tag. The automation can make decisions depending on events, notify you at key points, and can even wait for your contacts to open one email before sending the next.

The automation reports give detailed stats on the performance of your automations and you can easily see which contacts are at any given point in the automation, which is a really useful thing to know.

This barely scratches the surface of what the automation system can do, but I guarantee you it’s a far better system for photographers than the kind of linear non-intelligent autoresponder we usually see from other service providers.

With all these amazing features and cutting-edge technology, you might think ActiveCampaign would come second to iContact on cost (I assumed the same thing myself).

Sadly (for iContact) ActiveCampaign have them beat on this too.

For example, you can join the ActiveCampaign “Basic” plan (which is all most people need anyway) for just $9 per month at the time of writing! That’s insane pricing for what they deliver, in my opinion, but don’t tell them I said that because we don’t need them to raise the price 🙂

Get Started With Email Marketing 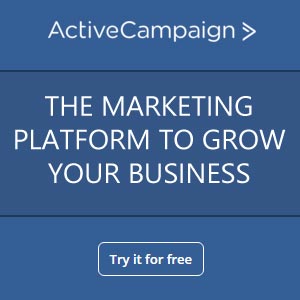 If you’re not currently using your website and blog to build an email list of interested and qualified leads, there’s a good chance you’re letting potential clients simply walk out the door and into the arms of your competition.

As you can see from the 6 areas I’ve talked about already, the best place to start is to take a 14-day free trial of ActiveCampaign to see for yourself what I’ve been talking about here.

In fact, one of my coaching members has already cancelled his iContact account and moved to ActiveCampaign after managing to get more done in ONE DAY there than he did in several months dealing with the frustrations of iContact!

Check it out, there’s no risk and you can always cancel when your free trial is over.

My guess, though, is you’re going to love it just as much as I do, and you’ll never look back.

FREE GUIDE: HOW TO COMPETE WITH CHEAPER PHOTOGRAPHERS WITHOUT LOWERING YOUR PRICES

Are you tired of losing clients because they "found someone cheaper"?

So was I, until I discovered how to compete without lowering my prices!

In this free email series, I'll share these ideas with you, so you can stop competing with the cheapsters.

Why most photographers get trapped in the race to the bottom...

8 strategies your cheap competitors can't afford to do...

The one marketing system 95% of photographers don't have...

How you can get more of the right clients...

Enter your email below to get this free email series and proven subscriber-only marketing tips: