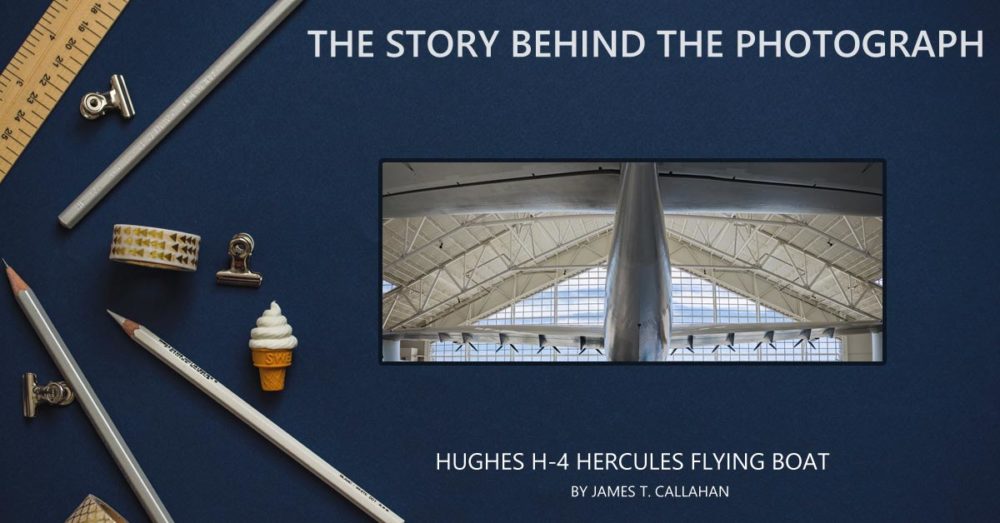 In the Summer of 2016 I made my second visit to the Evergreen Aviation and Space Museum in McMinnville, Oregon to again see and photograph the “Spruce Goose” flying boat.

I only use the plane’s nickname here so people will recognize it by its popular name; Mr. Hughes detested the monicker, as it was invented by The Press to discredit his most prized accomplishment.

The plane was developed in answer to the German U-Boat threat to shipping in the North Atlantic during World War II — a military transport designed to ferry large numbers of troops and armored equipment to the European Theater of war.

The Hercules was a pioneering development in modern aviation and its exhibit at the Evergreen Aviation and Space Museum is a registered historic engineering landmark.

Through sheer genius and innovation Mr Hughes and his engineers invented systems that are found in today’s modern aircraft.

They include a central fire extinguishing system and most notably, hydraulically-powered flight control surfaces.

The ailerons, flaps, elevators and rudder were so huge they needed a power assist so pilots could move them from the yokes in the cockpit.

The Hercules Flying Boat was Howard’s finest achievement in and contribution to aviation, his one and only true love.

James has always had a fascination with history and historic subjects. Consequently, his fine art work features 19th Century architecture, historic small towns, and the remnants of railroads from that era that used to connect them.

He has a professional photographic practice that engages in commercial assignments, fine art commissions and custom fine prints.

« BACK TO STORY BEHIND THE PHOTOGRAPH